I finished another little project on the weekend.

I made two hats for my friend and work manager, Atoy last year.  Each left me with half a skein of the yarn left which I just left in stash waiting for a new project.

The first half-skein ended up becoming a matching cowl for her Christmas present last year, and the second was supposed to become something for Christmas this year but my Christmas knitting sorta went off the rails.  So I got her something else and the yarn sat.  Last week, she started complaining (in a silly, hint-y sort of way) that she had a cowl to match her brown hat but not her pink one.  So I started designing a lacy cowl for her.  She commented that she really didn’t care if it was fancy; she just wanted something that matched.  Since the original hat I made wasn’t lacy either, something simple would actually be a better match.  I had already cast on 108 stitches and knit four rows of garter, so I figured I’d slip every sixth stitch, a la Malabrigo Neck Thingie and “Bob’s yer uncle!” 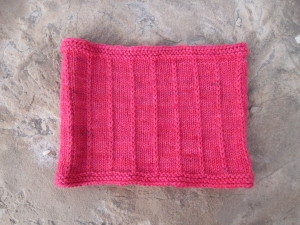 Who Was It Made For?  My friend, Atoy

Were There Changes Made To The Pattern?  Since I didn’t follow the pattern exactly, this question is not really applicable.  108 stitch cast on.

Did I Learn Anything New?  No.

Anything Else?  No.  Moves another skein of yarn into the Stashdown2013 pile, which is very happy-making.

Would I Make Another?:  Probably.  It was super easy and the result is remarkably pretty when done in a nicely dyed yarn.  The main thing?  The recipient loves it.