So, as mentioned in yesterday’s post, inspired by Shireen over at The Blue Brick, I decided to inventory my current WIPs.  It’s not pretty, let me tell you.

Currently on the needles I have:

Socks – 5 (including a secret project and a new design).  In all fairness, two of the remaining three have been cast on in the past two weeks and are mindless knitting.  The third is Margaritaville…one of the many items I want want to own, but apparently don’t necessarily want to actually knit.  I even purchased special Key Lime yarn for this project.  But it’s on sharp US0/2mm needles and it just does not call to me. 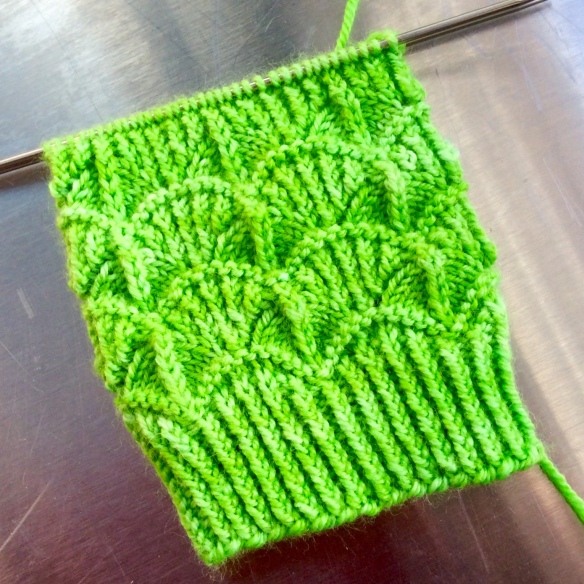 Shawlette – 1.  A shawlette pattern I adore (Canyonlands by Very Busy Monkey) in a stunning OOAK colourway from Tanis Fiber Arts.   What is my problem?

Boot toppers – 1.  A pair of Jax, modified to be knit in the round and worn with my jeggings.

Jax in Socks That Rock Mediumweight

Cowls – 3.  These include one crazy cabled one from Lucy Hague that I dearly love but is quite time consuming, one that started as a test knit just before I moved but didn’t get too far, and one in a chunky yarn that I think I may frog as I was using it to practice continental knitting after I took a class and then completely fell off! (Sorry, Kate!)

Fingerless mitts – 1.  I cast these on for Chase.  At least with these, I can tell you exactly why they are not done.  I am unhappy with how the first mitt turned out and realized I have to rip it back to the wrist to add thumb gussets.  The original pattern did not have them, and as a result, they are terribly ill-fitting (note to self: don’t ever knit mitts or gloves without thumb gussets ever again!).  So the project sits and languishes.  There’s that problem with frogging I mentioned.

For those of you counting, that 14 WIPs, only one of which I have an immediate plan to frog.  I am wondering if I broke it into manageable chunks, say, by vowing to knit a repeat a day (or 10 rows or some arbitrary number) would I make it through some of these.

For those of you who actually let your WIP basket get out of control, how do you get it back under control again?